The Beauty of Jordan

The Beauty of Jordan

After breakfast, visit Jordan’s mysterious desert monuments. These castles, forts and towers are dotted throughout the vast Jordanian desert, relics to the past right with crusaders and conquerors. The Kingdom of Jordan lies on the main crossroads between old European empires and the richness of the East.
Overnight – Amman (B,D)

A full day’s tour to Jerash, just a short distance north of Amman. This ancient city, so well preserved, is part of the larger “Decapolis”, a confederation of ten Roman cities from the 1st century B.C. In addition, settlements from the Bronze Age, the Iron Age, Hellenistic, Roman, Byzantine and other periods, indicate life here to be as old as 2,500 years or more. Jerash is known as the “Pompeii of the East” due to its extremely well-preserved remains. After Jerash, continue west to the castle of Ajlun, an excellent example of 12th century Arab architecture. Here, are the remnants of Saladin’s base, in his successful campaign to drive the Crusaders from Jordan in 1189 A.D.
Overnight – Amman (B,D)

Today will be spent touring what is probably Jordan’s most famous tourist attraction: The ancient rose-red Nabatean city of Petra. Offspring’s of Bedouin nomads, who at one time used Petra as a resting point between Arabia and the northern valleys, now stand tall and proud at the entrance. Enjoy a guided horseback tour to the most magnificent mysterious and always thrilling “Rose-red city, half as old as time”. Built over 2000 years ago, the Nabateans carved the entire city from the rose-red rock. The 1.2-kilometer-long gorge that zigzags through the mountains have protected Petra for several centuries. When the sun strikes it, catch it at its most brilliant and glowing pink- orange color. Afterwards, enjoy a picnic lunch.
Overnight – Amman (B,L,D)

Today is a free day to rest and relax.
Overnight – Amman (B,D)

20 miles south of Amman lies the Biblical city of Madaba. This morning you will visit its remnants of Roman roads and architecture, St. George’s Greek Orthodox Church and the earliest surviving map of the Holy Land from around 560 A.D. Encounter some fantastic mosaics before continuing to Mt. Nebo, a windswept hill overlooking the Jordan valley and Judean desert below. According to the three monogamous religions, it is here that Moses is buried, perhaps near the 4th and 6th century Church found here. It is easy to understand why Moses saw the chosen land from here; on a clear day, one can see as far as the church towers of Jerusalem.
Overnight – Amman (B,D)

Breakfast in hotel. Today we transfer to the airport for our return flight to the United States. (B) 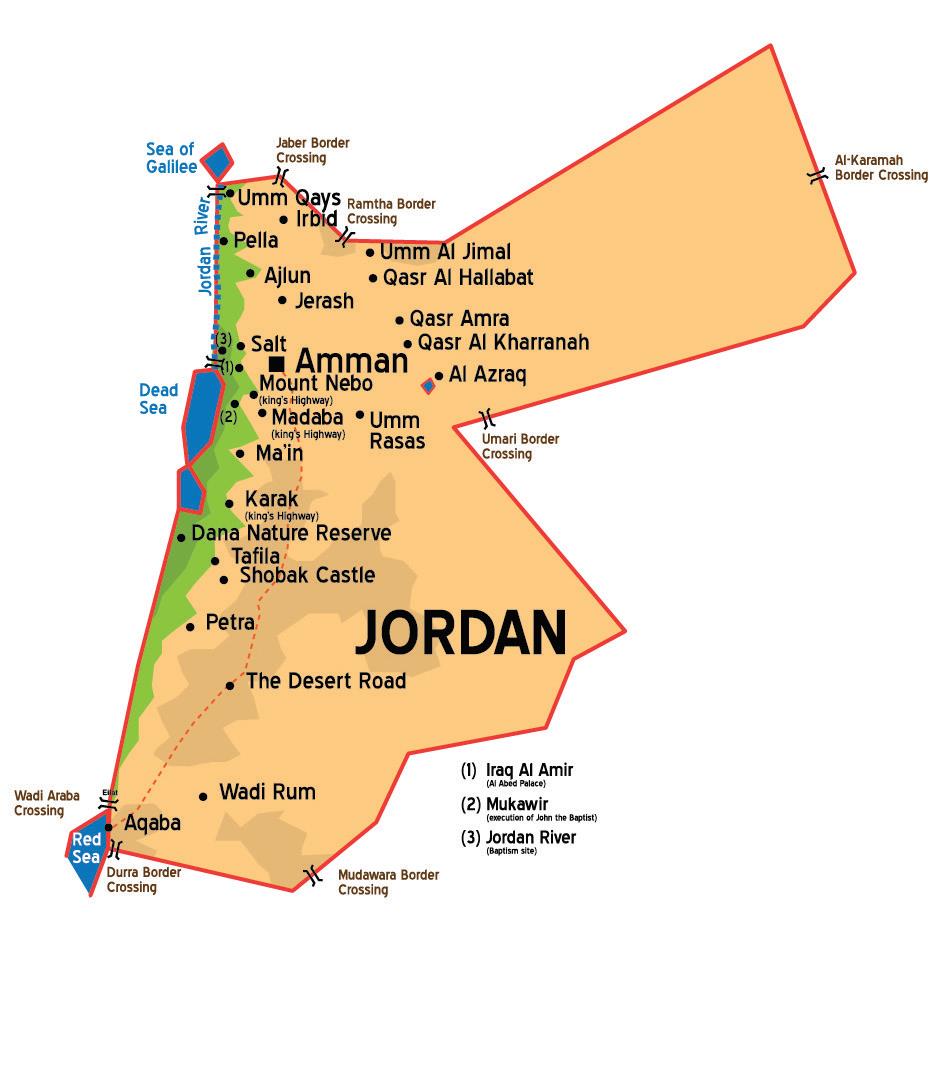