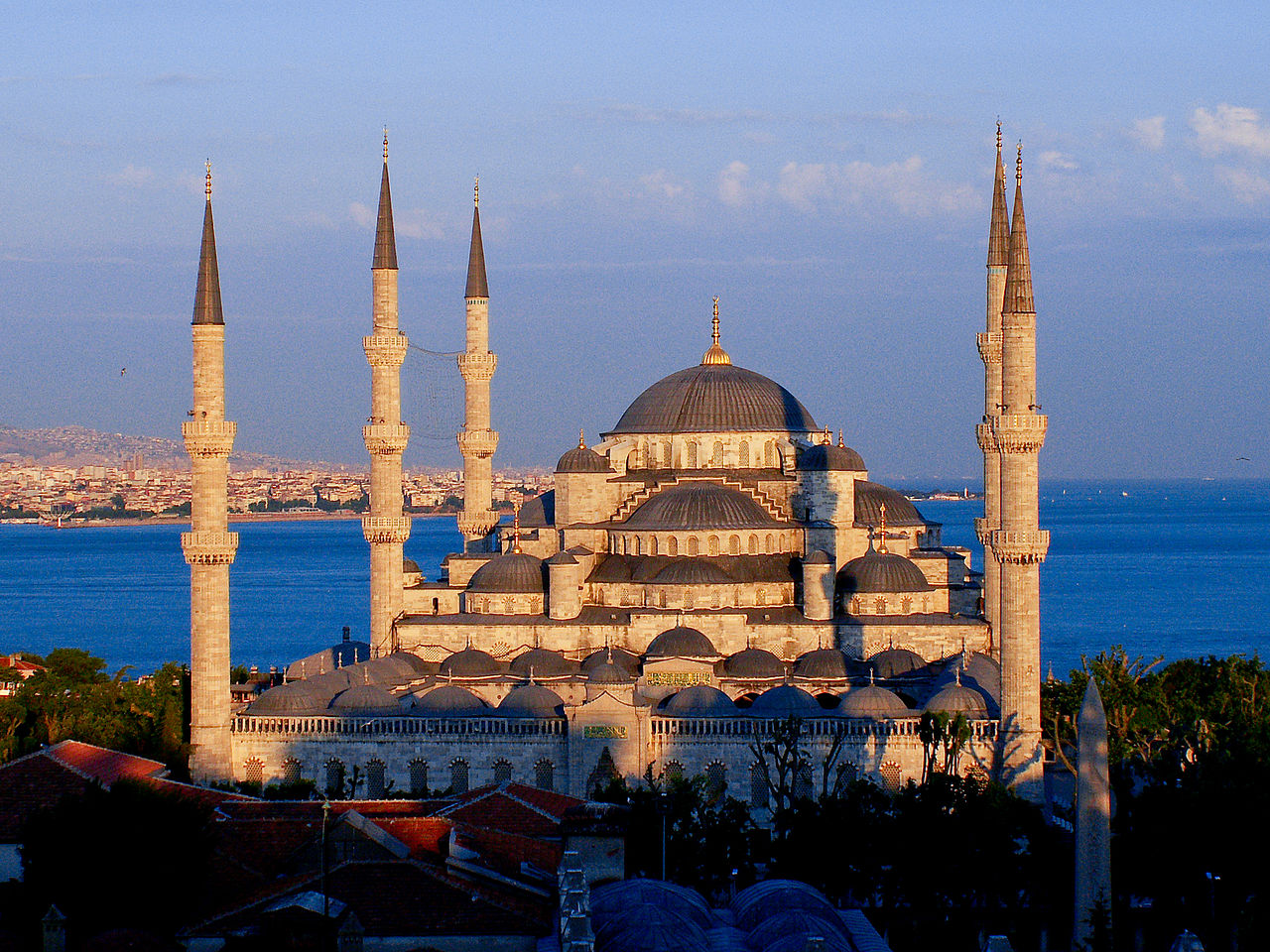 Today we depart from the United States to Turkey. Enjoy superb in-flight service and meals as we cross the Atlantic Ocean.

Upon arrival, meet with Tour Escort and transfer to the hotel. Remainder of day is at your leisure. Enjoy fine Turkish cuisine at your dinner.
Overnight – Istanbul (D)

Breakfast in hotel. Morning departure from Istanbul by to Canakkale (Dardanelles), the cradle of many ancient civilizations, taking visitors back into the depth of history. Discover the ancient city of Troy and a symbolic wooden Trojan horse commemorating the legendary war. Travel to Ayvalik where we spend the evening.
Overnight – Ayvalik (B,L,D)

Breakfast in hotel. This morning we drive towards Izmir. On route to Kusadasi, stop at ancient Pergamum, once ruled by Alexander the Great. Famous for the invention of parchment paper, Pergamum had a library containing 200,000 books. Visit the Acropolis, the Altar of Zeus, referred to as the “Throne of Satan” in the Book of Revelations, and the 10,000-seat amphitheater. Tour the marvelous Asclepeion, a 4th Century BC shrine to the healing God Asclepios. After lunch, we visit Thyatira (Akhisar) to see the remains of a basilica and fragments from the Roman period – also one of the Churches of Revelation (Rev.1:11; 2:18-29). Continue your day with a visit to Sardis which was berated by John the Prophet for its facade of strength when, in fact, it was weak (Rev. 3:1-6). Explore the Temple of Artemis, marble Royal Road, Gymnasium and the Synagogue.
Overnight – Izmir (B,L,D)

Breakfast in hotel. After breakfast, we leave Izmir and drive towards Ephesus (Rev. 1:11). Incomparable with any other archaeological site, Ephesus’s ruins are a feast to the visitor’s eye. Ruins dating back to the Roman period are probably the most interesting part of the excursion. Most trade routes ended here and goods were shipped to overseas countries. Two important Ecumenical Councils were held in the Church of the Virgin Mary, which is one of the Seven Churches of Revelation. The town was left for the Ayasoluk Christian Settlement, which was built around the Basilica of Saint John. The Selcuk town was built in the same area at the end of Christian domination. The Virgin Mary spent the last days of her life, and died, here after being entrusted to Saint John by Christ and therefore was brought to Ephesus. Next, we visit the museum and see the statue of Diana of the Ephesians. Continue through the Meander Valley to Hierapolis (Pamukkale – Cotton Castle) with its fantastic calcareous formations and pools of natural warm water.
Overnight – Pamukkale (B,L,D)

Breakfast in hotel. This day begins with a visit to Hierapolis (Pamukkale) where solidified calcium from the water formed “frozen waterfalls” which lead to shallow pools. Next, we tour the ruins of Ancient Hierapolis. This town was a healing center founded about 190 BC. It had a large Jewish community and an early Christian church. Christianity came here via Paul (Colossians 4:13). Hierapolis contains perhaps the biggest cemetery in Asia Minor with tombs dating from the Hellenistic Era to the early Christian period. Enjoy a thermal bath, if you like, to rid you of the day’s dust and tiredness. Afterwards, we drive to Colossae which is famous as the receiver of Paul’s Letter to the Colossians. Also, we view the traces of the Theatre, the Necropolis and the Church. Continue your day in Laodicea, one of the Seven Churches (Rev. 3:14-22). In the famous scripture, Jesus says to the Laodicean Church: “Behold, I stand at the door.” Next, we visit Philadelphia Church (Rev. 3:7-13) referred to as the New Jerusalem.
Overnight – Pamukkale (B,L,D)

Breakfast in hotel. Today we check out of our hotel and travel to Cappadocia via Konya. On the way to Konya, we visit Pisidian Antioch, where Saint Paul decided to turn Gentiles by opening the gates of Christianity to the Pagan world. Konya, known as Iconium in the Roman times, was visited by Saint Paul during his missionary trips. In Konya, known by the Islamic world as the city of Mevlana and his Whirling Dervishes, we visit the Mevlana Mausoleum and Mevlana Museum. In the afternoon, we travel to Cappadocia for our overnight.
Overnight – Cappadocia (B,L,D)

After early breakfast, we depart. The ancient region of Cappadocia lies in central Anatolia, between the cities of Nevsehir and Kayseri. Here we find the most fantastic landscapes in the world. Three million years ago, violent eruptions covered the surrounding plateau with tuff. Wind and weather eroded the soft volcanic rock into hundreds of strange pillars, cones and chimneys. Since ancient times, men have hollowed dwellings in this soft rock. The early Christians made cave churches, chapels and monasteries. There are over 600 scattered throughout the valleys. Also in this region are several underground cities which were used by the Christians as places of retreat to live until danger had passed. These cities were well-hidden, safe havens located in the Goreme Valley. Afterwards, we visit a Turkish carpet manufacturer. Later, we visit the underground city of Kaymakli. In the evening, we depart for a flight to Istanbul. Transfer to our hotel.
Overnight – Istanbul (B,L,D)

Breakfast in hotel. This morning we begin with the Hippodrome, once the center of Byzantine life, which houses the impressive granite obelisk of Emperor Theodosius and was carved in Egypt in 1500 BC. Theodosius brought the obelisk to Constantinople in 390 AD and added military engravings of his likeness. Next, a visit to the Sultan Ahmet, the Blue Mosque, the most famous mosque in Turkey built in 1603, and the only one to have six minarets, a style borrowed from the sacred mosque of Kaaba in Mecca. It stands boldly silhouetted against the sky with its cascade of domes and half domes. The architect, Mehmet Aga, decorated the interior like a jewel. The tiles, stained glass windows and decorations inside are magnificent. Upon entering, participants must remove their footwear and cover their heads and shoulders. Afterwards, we visit Hagia Sophia (Saint Sophia) considered as one of the eight wonders of the world and once the biggest cathedral of the Christian world. It was built by Constantine the first in the Fourth Century, and its name means Holy Wisdom. Continue to the Sixth Century Basilica Cistern, with 336 columns brought from nearby temples, which served as one of the many local water supplies. We travel to the Grand Bazaar in the Old City. This bazaar was originally built as a horse stable for the Ottoman cavalry. Enjoy some free time among thousands of shops. In the evening, we will enjoy our Farewell dinner.
Overnight – Istanbul (B,L,D)

After early breakfast, we transfer to Istanbul Airport for our return flight to the United States. (B)