Today we depart for Spain. Enjoy superb in-flight service and wonderful meals as we cross the Atlantic Ocean.

We arrive in Madrid which is the capital of Spain. Meet a representative who will assist us through customs. Drive to the cosmopolitan city of Madrid and check into our hotel. Remainder of the day is free for rest. In the evening, enjoy dinner at our hotel.
Overnight – Madrid (D)

Breakfast in hotel. We start the day with a tour of Toledo. Toledo, located by the Tagus River, has picturesque buildings in an array of architectural styles. In its medieval past, Toledo appears as an example of tolerance and coexistence for the Jewish, Muslim and Christian cultures. Toledo is known for its special musical splendor and tasty traditional recipes. The Christian presence in Toledo is apparent. The most visible product of this is the massive Gothic cathedral located in the center of the Muslim City. One of the most remarkable Spanish artists was El Greco who came to Spain in 1577. We visit his house which is now a museum of his works. Dominicus Theotokopoulos (El Greco) was drawn to the city of Toledo by its breathtaking beauty. Next, we visit the Church of Santo Tome where we view the most famous painting of El Greco – “El entierro del Conde de Orgaz.” We continue to the Synagogue of the Transit which was re-constructed in 1336. After the expulsion of the Sephardic Jews in 1459, this building was no longer a synagogue and came under the religious order of Calatrava and afterwards of the Alcantara. This afternoon we drive back to Madrid for a visit to the Prado Museum which houses masterpieces of Velazquez, Goya, El Greco, El Bosco, Murillo, Rubens and more. Afterwards, we continue to the magnificent 18th century Royal Palace, one of the most beautiful palaces in all of Europe. In the evening, enjoy dinner in a charming restaurant.
Overnight – Madrid (B, D)

Breakfast in hotel. This morning we leave Madrid on the high-speed train (AVE) to Seville. Enjoy First Class cabin aboard the train. We travel to the marvelous city of Seville with its unique ambience and its great monuments. Experience the Arabian bell-tower Giralda, a mixture of Gothic, Renaissance and Moorish styles, the enormous cathedral, Torre del Oro, and the old Jewish district Barrio Santa Cruz where you view narrow and colorful streets with orange trees and beautiful courtyards. Follow in the footsteps where Christopher Columbus began to dream of his trip to India. Proceed to the Plaza de Espana built for the Ibero-American Exposition in 1929. Tonight, we will enjoy dinner in a local restaurant.
Overnight – Seville (B, D)

Breakfast in hotel. This morning we drive from Seville to Cordoba. Cordoba, the long-time center of Moorish Spain, preserves monuments of outstanding importance. Perhaps most impressive is the Mezquita, the great Mosque and its beautiful courtyards. We will have a walking tour through the fascinating Jewish Quarter. This entire area had been influenced greatly by quaint Jewish Quarters before the expulsion. View the Moorish Mills, Waterwheel and Roman Bridge. This evening we will enjoy a dinner in a local restaurant.
Overnight – Cordoba (B, D)

Breakfast in hotel. We drive from Cordoba to Granada. The name Granada is ancient and mysterious. It may mean “great castle” for the Roman fortress which once stood on the Albaicin Hill. When the Moors came here, the town was largely inhabited by Jews for which they called it Garnat-al-Yahud (Granada of the Jews). Granada was the last Muslim City to fall to Christian hands in 1492 by Queen Isabel of Castile. One of the most brilliant jewels of universal architecture is the Alhambra, a series of palaces and gardens built under the Nazari Dynasty in the 14th Century. We have a walking tour of the Alhambra Palace and Generalife (Summer Palace). Also included is a visit to San Jeronimo Monastery. In the evening, enjoy a delightful dinner in a local restaurant.
Overnight – Granada (B, D)

Breakfast in hotel. This morning we travel through the mountains of Malaga to Costa del Sol. Enjoy some free time in the Torremolinos market and continue to Marbella. In the evening, enjoy dinner in a local restaurant.
Overnight – Marbella (B, D)

Breakfast in hotel. In the middle of the mountain range, Serrania de Ronda, at the edge of a canyon lies the town of Ronda – certainly one of the most incredible places in all of Spain. Set high on a plateau, the view is truly breathtaking. View what is considered Spain’s oldest bullring, the Plaza de Toros. You will notice a mixture of architectural styles: Arab, Gothic, and Renaissance. Enjoy some free time to explore this wonderful Town of Dreams on your own. Return to our hotel for dinner.
Overnight – Marbella (B, D)

Breakfast in hotel. If weather permits, we will journey to Gibraltar where we can see the African Continent and the famous silhouette of the Rock of Gibraltar. Here we must show our passports before entering the “Rock”, a British territory for nearly 300 years. Gibraltar played a strategic role during both World Wars. We will visit the nature reserve, Apes and St. Michael’s Caves. Drive along the Costa del Sol and return to Marbella for some free time. In the evening, we enjoy our special Farewell Dinner at a local restaurant and say Adios to our tour guide.
Overnight – Marbella (B, D)

Breakfast in hotel. Today we transfer to the airport for our return flight to the United States. (B) 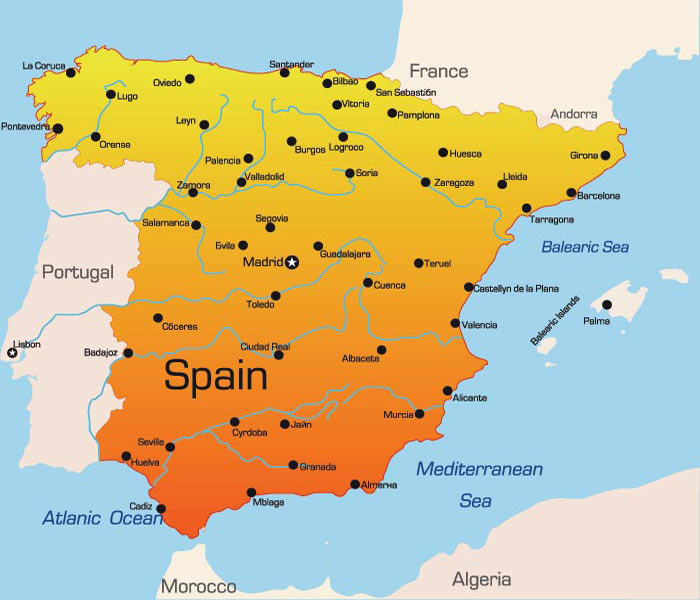