Today we depart from the U.S. for Greece. Enjoy on-board meals and entertainment as we cross the Atlantic Ocean on our way to Greece.

Arrive in Athens. Meet our representative and transfer to hotel. In the evening, enjoy an unforgettable sound and light show on the Acropolis. The show will be followed by dinner in Plaka, facing the Acropolis, with bouzouki music and Greek folk dances. Return to hotel.
Overnight – Athens (D)

Leave Athens by the coastal road of the Corinth Canal. Drive to Mycenae. View the beauty of Agamemnon’s Greece in the famous Gate of the Lions and the Acropolis. Afterwards, visit the famous theater of Epidaurus, built 2400 years ago and the nearby healing center dedicated to Asclepius, the God of Healing.
Overnight – Nafplio (B,D)

Drive in the morning through the Central Peloponnese, Arcadia – home of Pan and the Nymphs – and the towns of Tripoli and Megalopolis, to Olympia, the cradle of the Olympic Games. Visit the sanctuary known as the Altis which consists of an unordered arrangement of various buildings. Enclosed within the temenos (sacred enclosure) are the Temple of Hera, the Temple of Zeus, the Pelopion, and the area of the altar where the sacrifices were made.
Overnight – Olympia (B,D)

Drive through the plains of Ilia and Achaea through Patras, capital of the Peloponnese, and cross the Rio-Antirrio, one of the world’s longest multi-span cable-stayed bridges and longest of the fully suspended type. Onwards, past picturesque Nafpaktos (Lepanto), stop at the seaside areas of Erateini or Itea for swimming and optional lunch. After lunch, arrive in Delphi and visit Castalian Spring and the Sanctuary of Athena Pronaia.
Overnight – Delphi (B,D)

In the morning, visit the Temple of Apollo Pythios and the museum. Depart for Kalambaka, passing through numerous picturesque villages and typical towns of central Greece.
Overnight – Kalambaka (B,D)

A morning tour of Athens. Visit the center of Athens, Constitution Square, Parliament House, Memorial to the Unknown Soldier and the National Library. Driving down Herod Atticus Street, see the Evzones (Greek Presidential Guard) in their picturesque uniforms and the Presidential Palace. See the Panathenaic Stadium, where the first Olympic Games were held in 1896, and the Athens of the 2nd century A.D. – the Temple of the Olympian Zeus and Hadrian’s Arch. On the Acropolis, visit its museum and the architectural masterpieces of the Golden Age of Athens: the Propylaea, the Temple of Athena Nike, the Erechtheion and the Parthenon.
Overnight – Athens (B)

After breakfast, we transfer to Athens Airport for our flight back home. (B) 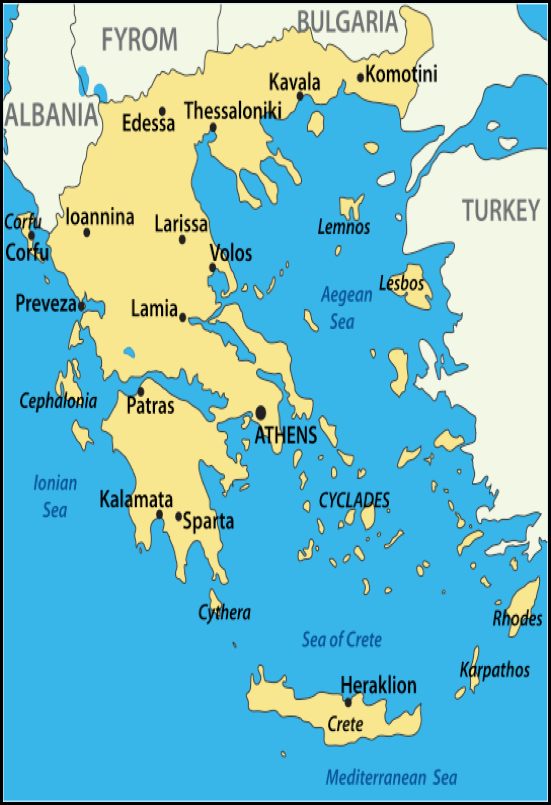